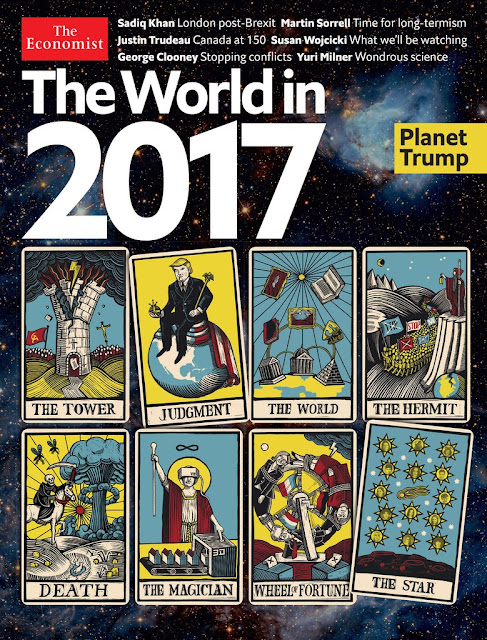 UPDATE: 5 Jan 2016:  Given the date of the 70 nation meeting in France on 15 Jan 2017 to divide Israel, it is my current view that card one does show Jan 16th 2017.  The Tower card being divided could represent the USA being split down the New Madrid fault for its actions against Israel or it could mean Israel itself being split.  The 10 Bits of Flame with the lightning bolt in the middle I believe to be Daniel 7:7-8, The beast with 7 head and TEN HORNS,  the lightning bolt is a representation of DAN 7:8 the LITTLE HORN or the antichrist (the god of the elite).  The lightning bolt is also representative of Luke 10:18 (please see my other post on this matter   http://penitenziagite2016.blogspot.co.nz/2016/11/jan-2017-economist-cover-updated.html  ).  Funny that 16 Jan 2017 is Tevet (10th month) 18 in the Hebrew year 5777.  I THINK 16 JAN 2017 AND THE QUICK RESPONSE BY THE LORD TO THIS TREACHERY IS GOING TO BE ONE FOR THE HISTORY BOOKS.


I just bought a copy of the 2017 economist magazine and read the letter from the editor.  The 'notice' on the door of the tower is the notice that Martin Luther nailed to the door of Wittenberg castle beginning the Protestant Reformation.

In 1760, during the Seven Years' War (more specifically the Pomeranian War), the church was destroyed by a fire resulting from bombardment. The blaze left only half of the foundation standing,[7] and none of the wooden doors on which Martin Luther had posted the Theses.[4] All Saints' was soon rebuilt, albeit[6] without many priceless works of art that were lost forever.

Seven years War / beginning of 7 year Tribulation? (an allusion to... whether it is that exact time-frame or not it may be that is what the elite think).

All Saints' is also known for its 88-metre (289 ft)-tall steeple, from which one can obtain a good view of the city of Wittenberg and the surrounding countryside. A quote, "Ein' feste Burg ist unser Gott" ("A mighty fortress is our God"), from one of Luther's hymns, encircles the tower.

You can't see a spoke behind Gert Wilders...

10 June 2017 Jerusalem will be ringed by Europe (Political or possibly even militarys) enforcing this upcoming 15 Jan 2017 stab in the back. Jerusalem & Israel ringed by the 2 powers of Europe (France [15 Jan treaty] and Germany [the real power of Europe]) as well as the Netherlands (The Hague, World Court).


https://m.youtube.com/watch?v=bwdCWttLjjA
"Announcing the coming of the Glorious Kingdom!" starting at the 4:10 mark.

UPDATE 9 11April 2017:  Cliff High of Half Past Human during an interview with Greg Hunter of USA watchdog.com at the 3 min and 15 sec mark talks of the Youtube censorship and killing of Ad revenue that began on 7 March 2017.  It is having a tremendous effect on the alternative media which relies heavily on ad revenue  https://www.youtube.com/watch?v=AJcbP2-48P8

Look at the Hermit picture and look at the protestors below "The Alternative media" sea of protestors... now being silenced.

The MOAB explosion is so large it produces a mushroom cloud just like a nuclear explosion.

Seems to be a fulfillment of the Death Card that had a value of 13 and was in the April spot.

UPDATE 10 25 July 2017:  On the very date of the star card on the Gregorian dates which was 17 July 2017 (I have another post on dates in Hebrew that appear to be running parallel to the Gregorian that just finished) Israel regained control of the Temple Mount.
http://endtimesforecaster.blogspot.co.nz/2017/07/breaking-prophecy-alert-major-temple.html

Please see Link here to the Hebrew dates that seem to be running parallel to the Gregorian.
http://penitenziagite2016.blogspot.co.nz/2017/05/the-2017-economist-cover-using-hebrew.html


Article begin:
8 cards actually called Trump cards, each has a value according to Sedona Deb aka banksterslayer.   https://www.roguemoney.net/stories/2016/11/23/eight-trump-cards-in-2017


Dec 16th (the Friday after the Fed reserve interest rate decision... I'm expecting a rise).
Jan 20th (the day of presidential inauguration)
Feb 21st ( ?)
March 9
April 13 (nuke war)
May 1st (Birthday of the Illuminati)
June 10th
July 17 (14 days before the 9th of Av... 14 stars with faces - 10 white stars in background).
"Av on one hand includes a “low point” on the Jewish calendar—the Ninth of Av, the day of the sin of the spies, and the destruction of both the First and Second Temples in Jerusalem. On the other hand, it also incorporates a “high point”: the 15th of Av, a day designated for finding one’s predestined soulmate, is considered one of the happiest days on the Jewish calendar."
http://www.chabad.org/thejewishwoman/roshchodesh_cdo/aid/2263460/jewish/Av.htm

"The first nine days of the month of Av, and also the morning of the tenth,1 are days of acute mourning for the destruction of the first and second Holy Temples."


17 Kislev 5708 - November 30, 1947:
The United Nations, by a vote of 33-13 with 10 abstentions voted in favor of the partition of Palestine. This vote enabled the establishment of the State of Israel as a national homeland for the Jewish People.
The Jewish area was split into three non-contiguous plots, with no consideration of security: the eastern Galilee, the coastal plain from Haifa down to Tel Aviv, and the majority being the uncultivable Negev desert. The other half of the land was to form a new Arab state. Jerusalem and its 100,000 Jews was to be completely surrounded on four sides by the Arab state, and administered as an international zone. Despite these unfavorable terms, the Jewish Agency immediately accepted the Partition Plan; the Arabs immediately rejected it. Fighting began soon after, leading to a full-scale assault in 1948 by troops from Lebanon, Syria, Iraq, Egypt, Jordan, Saudi and Yemen.

The magician card i have postulated to be May 1st (Birthdate of the Bavarian Illumnati).   4 houses completed (April) and 3D (or 30) on the printer box.  April 30th.


17 pieces of stone forming an archway over the tower door.
very telling   http://scottishrite-greenbay.com/17th-degree/

" 17° Knight of the East and West
The lessons of this degree are that loyalty to God is man’s primary allegiance, and the temporal governments not founded upon God and His righteousness will inevitably fall."

The lightning bolt/ storm clouds appear in the "Tower card" and then appears again in June "wheel of fortune".  James Bailey of z3news.com has a dream which he titled the "Final Four seasons of the US Dollar"
https://z3news.com//w/final-four-seasons-us-dollar/

There is a devaluation of the US Dollar of 30-40%, then the Euro and Swiss Franc are destroyed.  The US and Europe hobble along for another season before the last season, season 4, arrives and destroys the entire financial system.  Is this what is being shown?  It does show Angela Merkel (Globalist) descending and Marine Le Pen ( French Nationalist) and Gert Wilders (Dutch nationalist) rising.  Regardless of the public mood, by June 10th, the Financial storm returns.

And another angel followed, saying, “Babylon[f] is fallen, is fallen, that great city, because she has made all nations drink of the wine of the wrath of her fornication.”
Now read Rev 8:10 -13